The Time Trapper is a powerful evil figure who exists at the End of Time. His ability to manipulate time has made him an enemy to the Legion of Super-Heroes, who he violently hates. He is responsible for the Legion's creation, having designed them to fight his enemy Mordru. Because of his ever-changing nature, several different people have been revealed or implied as the Trapper's true identity. These names include a Controller, his assistant Glorith, the hero Rokk Krinn, the young girl Lori Morning, and the villain Superboy-Prime. Brainiac 5 theorized the Time Trapper is actually a "sentient alternate timeline rebelling against ours. His own history changes, I'd guess even his identity could alter, as the true timeline marches on." 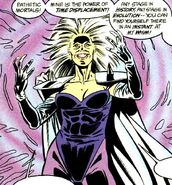 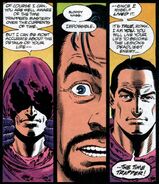 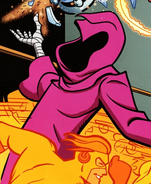