The rational part of me, the grown-up, says we're totally screwed. The problem is too big and terrifying. But the kid in me? You know, the Teen Titan? He's fearless, and his hope is absolutely limitless. You know that feeling, Raven. It's why we all choose this life. And that's why it has to be the Titans. Together. Fearless as kids, strong as the Justice League.

The Titans are made up of ex-members of the Teen Titans who were originally brought together by Nightwing to investigate the cause of their conflicting memories regarding their collective past. The group was later reformed by the recently returned Wally West to investigate newly discovered alterations to their universe's history. 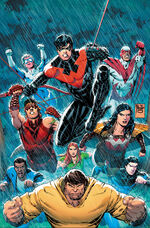 While on a mission for Spyral, Dick Grayson was investigating a town where he sees various signs that make him think about the Teen Titans. Eventually, he is reunited with several of his former teammates where he learns from Lilith Clay that all memory of the original Titans was erased by Lilith, to protect the team from an evil demon called Mr. Twister. The team reforms in order to finally take down Mr. Twister once and for all.

The Return of Wally West 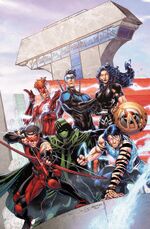 After Wally West had escaped from being trapped in the Speed Force, he began looking for the Titans to inform them on how an inter-dimensional demon had stolen ten years of all of their lives. Since Wally had been erased from time by Abra Kadabra, none of the Titans recognized or remembered Wally, until Wally came into physical contact with them, "shocking" their memories back to life.[2] After all the Titans had been caught up to speed, they decided to reunite as a team once again to investigate the case of their stolen memories.

As the Titans continue to search for the reasons behind their lost memories, Wally sits down with Lilith so that she can read his memories and discover anything he could unconsciously know. She found nothing helpful but she did find he had been thinking about Linda Park. After this realization, she received psionic waves that informed her of Abra Kadabra. Then in Keystone City, Kadabra creates evil versions of the Titans. When the real Titans arrive they engage in a battle with the doppelgangers. Kadabra and his Titans doppelgangers then retreat. Wally goes to Linda to try and start things over, but she is kidnapped by Kadabra.

When the Titans reunite with Wally, shaken from the fact that he's putting his loved ones in danger, they split up into three groups to track down the doppelgangers. They all fight the doppelgangers in three different locations while Linda is a minute away from death. Wally takes down the fake Kid Flash, only to be faced by Abra Kadabra, who informs him that all of the Titans and Linda Park are seconds away from death, and in four completely different locations. Wally will have to run over 7,000 miles to save them all. However, this is all part of Kadabra's plan to send Wally back into the Speed Force. Wally saves them all, but he is lost to the Speed Force.

During the fight, Omen searches through Kadabra's mind, discovering his goal: endless applause. Wally is pulled back out by his friendship with the Titans and takes down Kadabra, punching him into the time stream. It is here when Deathstroke, discovers the existence of Wally West.

Retrieved from "https://dc.fandom.com/wiki/Titans_(Prime_Earth)?oldid=2669014"
Community content is available under CC-BY-SA unless otherwise noted.