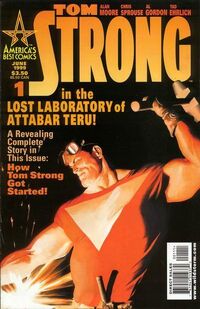 Tom Strong (Volume 1) was an ongoing title published by America's Best Comics from 1999 until 2006, written by Alan Moore and illustrated by Chris Sprouse. The title character, "Tom Strong", was a science hero, and sort of a stylistic amalgamation of many pulp and 1950's age heroes.

Retrieved from "https://dc.fandom.com/wiki/Tom_Strong_Vol_1?oldid=2646275"
Community content is available under CC-BY-SA unless otherwise noted.