There are a million ifs in a man's mind-- and not one in his actions.

Tomar-Re was a member of the Green Lantern Corps.

Tomar-Re was a scientist on the planet Xudar before joining the Green Lantern Corps. He became a pivotal member of the Corps, training new members, like Arisia, and serving in the Honor Guard. He investigated reports of abuses of power by Sinestro on Korugar. He was close friends with Abin Sur, Green Lantern of neighboring sector 2814.

Tomar's most famous mission while serving in the Corps dealt with the planet Krypton. Krypton, a planet in Sector 2813, was growing increasingly unstable. It was due to explode, caused by internal pressures deep inside the planet's core. Tomar-Re sought to use a rare compound called Stellarium to absorb some of the tectonic pressure, thus saving the Kryptonians. He gathered the compound, and was en route to Krypton when a yellow solar flare blinded him, and forced him to drop the stellarium. He quickly recovered, but discovered he was blind. He gathered what little stellarium he could without his sight, and proceeded towards Krypton. He was closing in when his vision started to clear. The first thing he saw upon his sight returning was Krypton exploding. The Guardians of the Universe recovered Tomar and brought him back to Oa, where he healed and rested.[1] 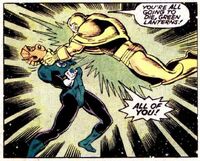 He later grew to a senior honored member of the Corps, but his later career was not without cost. The most difficult moment was during the Nekron crisis when the death god used the spirit of Tomar-Re's deceased father to attempt to sway the Lantern to surrender. Although tempted, Tomar kept to his oath and destroyed his father's spirit to continue the battle, much to his personal anguish.

During the Crisis on Infinite Earths, Tomar-Re took part in a battle in the Antimatter Universe on Qward to prevent the destruction of the Anti-Monitor's remaining tethers to the physical world. He was dealt mortal injuries by Goldface, and with his dying breath left his Green Lantern Ring to John Stewart. Hal Jordan, who had been retired at the time, was able to take back the ring from Abin Sur he had passed on to Stewart.[2]

Retrieved from "https://dc.fandom.com/wiki/Tomar-Re_(New_Earth)?oldid=2750901"
Community content is available under CC-BY-SA unless otherwise noted.