Topo the Octopus is an animal companion to Aquaman. He is recognized as a member of the Aquaman Family, and frequently helps them out in combat. Usually he is seen babysitting Aquababy to the best of his ability. There is a second Topo who becomes an ally to the second Aquaman. He is an anthropomorphic squid-boy from Dyss, who helps Aquaman open portals throughout the ocean. Topo was created by Ramona Fradon, first appearing in Adventure Comics #229. (1956) 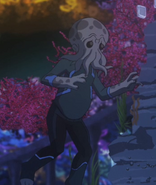 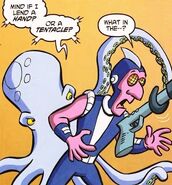 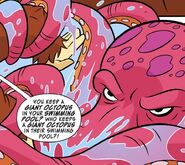