Trident is a name used by several super-villains, primarily enemies of the Teen Titans. The original three were former H.I.V.E. agents who struck out on their own, each using the same costume to appear as though they were one person. This included the Prof who designed their weapon, an unnamed black man who used to fight in the Golden Gloves, and an enforcer named Sammy Jaye. Sammy was murdered by the other two for holding out on them, and their ruse was discovered when the Titans tracked them down and arrested them. Since then the unnamed boxer has been the only one to return to the role. Karate Kid of the Legion also used this alias when he was lost in time and mind-controlled by Starro. Trident was created by Marv Wolfman and George Pérez, first appearing in New Teen Titans #33. (1983) 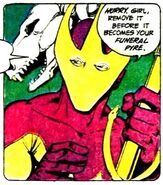 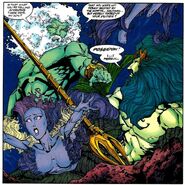 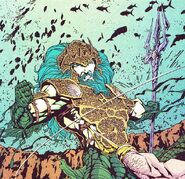