Tweedledum and Tweedledee are enemies of Batman. They are the cousins Dumfrey and Deever Tweed; after Dumfrey's death, another cousin named Dumson took his spot.

Dumfrey and Deever Tweed are cousins who resemble each other so closely that they are often mistaken for identical twins. The pair are known as Tweedledum and Tweedledee as a play on words on their real names and also because they disguised themselves as the characters in Lewis Carroll's sequel to Alice's Adventures in Wonderland entitled Through the Looking-Glass, achieving an uncanny resemblance to Sir John Tenniel's depictions of those characters.[1] The two Tweeds always conduct their criminal activity in partnership with one another and they prefer mastermind criminal schemes, often letting their henchmen carry out any necessary physical activity.

Tweedledum and Tweedledee started their life of crime in Gotham City, stealing valuables from different places at the same time, to confuse the police and the local crime fighters, Batman and Robin. On their first encounters, the Tweeds were victorious over the dynamic duo, but on fourth encounter, Batman and Robin stopped them and delivered them to the authorities.[1] 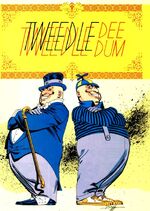 Not long after this, the duo escaped prison and started a criminal racket using a fake hotel to lure people and steal from them. They were eventually discovered and captured by Batman and Robin.[2] Shortly after this, the Tweeds set up a political campaign to become Mayor of a town called Yonville. The Tweeds used the law to arrest Batman and steal from the townsfolk, but they paid for their crimes after Batman escaped from prison and captured them.[3]

With time, the Tweeds were diagnosed with some kind of mental illness and were locked away in Arkham Asylum.[4] It is there that they formed an alliance with the Joker and when they escaped from the madhouse, they started a criminal spree in Metropolis. The Tweeds acted as Joker's enforcers and were often used to perform crimes that Joker wouldn't risk to commit. The Tweeds were stopped by the combined efforts of Batman and Superman.[5]

At the time of the great gang war of Gotham, Tweedledum and Tweedledee were present at the massive criminal gathering in Robinson Park and during the following encounter with the GCPD, Dumfrey Tweed was murdered in the shooting.[6]

During the Infinite Crisis, Tweedledum and Tweedledee appear as members of Alexander Luthor, Jr.'s Secret Society of Super Villains. Joker refers to them as "Tweedledee and the new Dum" implying that the original Tweedledum is either dead or still incarcerated. It was later confirmed in Detective Comics #841 that Dumfree Tweed had died and his twin brother Dumson Tweed had taken his place. 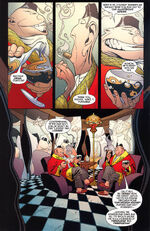 Recently, the new Tweedledum and Tweedledee were part of the Wonderland Gang. Originally believed by the public to be run by the Mad Hatter, it was revealed that The Tweeds really ran the gang using one of Tetch's own mind control devices on him in order to cash in on his notoriety. They filled the Wonderland Gang with other pairs based on Alice in Wonderland (such as the Lion and the Unicorn and the Walrus and the Carpenter). The Mad Hatter eventually got back at them by sticking mind control chips on the two and turning them on each other.

After some imprisonment, the Tweeds reformed the Wonderland Gang with the Walrus and the Carpenter but were quickly apprehended by Batman, Robin and Nightwing.[7]