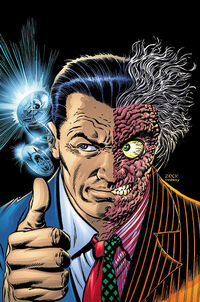 Two-Face was previously known as Harvey Dent; Gotham City's District Attorney. A righteous man to the core, he chased down criminals and sought the elimination of organized crime from the city. However, his life took a wrong turn when he was attacked during a trial and his face was scarred in half with acid. Losing the notion of right and wrong, Dent adopted the identity of Two-Face and started creating his own balance using his trademark coin.

Two-Face's obsession has made of him a formidable enemy, as his crimes would always have a second layer and his purpose is dictated by chance.

Retrieved from "https://dc.fandom.com/wiki/Two-Face_Recommended_Reading?oldid=2552587"
Community content is available under CC-BY-SA unless otherwise noted.