Ultra the Multi-Alien is a space-traveling super-hero. In his era, space-travel is commonplace, and he began his career as the human astronaut Ace Arn. He was simultaneously shot by four aliens on a mission, each using a gun designed to transform others into a member of their own species. This caused him to develop characteristics of all four of those species, transforming him into a unique life-form. Taking a new name from their initials and his own, he decided to become a crime-fighting adventurer. Eventually he is shown to have time-traveled backwards, making him part of the modern era. Ultra the Multi-Alien was created by Dave Wood and Lee Elias, first appearing in Mystery in Space #103. (1965) 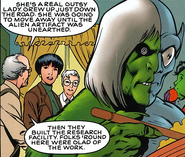 Ace Arn
Other Media
The Brave and the Bold