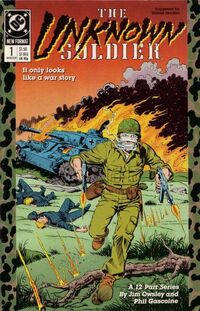 Unknown Soldier (Volume 2) was a twelve-issue limited series published from the Winter of 1988 until December of 1989. The series was set in the modern era and featured a different character from the one spotlighted in the original series.

Retrieved from "https://dc.fandom.com/wiki/Unknown_Soldier_Vol_2?oldid=2803191"
Community content is available under CC-BY-SA unless otherwise noted.