Untold Legend of the Batman (Volume 1) 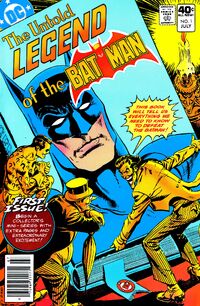 The Untold Legend of the Batman was a three-issue limited series published from July to September of 1980. Written by Len Wein and pencilled by John Byrne and Jim Aparo, the series revealed many unknown aspects of the Batman's origin, as well as recapping events from pivotal Batman stories from the past.

This series was also published as a 6×9 mini-comic. These comic books came packaged with an audio cassette in a hard, see-through plastic case by Shan-Lon Enterprises. The cassette contained a narration of the story. The comics were very similar to the original except they were a bit smaller and had the Shan-Lon/MPI logo on the bottom of the cover.

Back to Comics Contents : Comics U : Untold Legend of the Batman Vol 1

Retrieved from "https://dc.fandom.com/wiki/Untold_Legend_of_the_Batman_Vol_1?oldid=1993575"
Community content is available under CC-BY-SA unless otherwise noted.