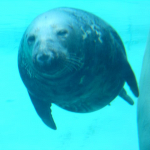 Lives in a van down by the river

In his early years, Shawn was a happy-go-lucky child without a care in the world. He lived in Downers Grove with his mom and dad. His classmates gave him his nickname, Smiley, because he never seemed to frown. Ah, happy days... Then Highschool began.

His smile turned upside down. Bullies, pretty girls, the lunchlady, all would tease him relentlessly. His friends were all swallowed up in the teenage life, and no longer had time for his games. Shawn's world was collapsing. Despite being of the class of 2000, he felt nothing mattered anymore. He didn't matter.

Though he survived highschool, he remained scarred. Years of therapeutic sessions and treatments helped to drive out the sadness, yet something still remained. Nothing could erase the traumatizing memories. Shawn felt the irony of life. Going from happy, to miserable, and then total madness. But don't worry, he'll be alright. Insanity can be fun. HeeeeheeheehoohoohooHawHawHaaaaaaHaaaHAAAAHAAAAAAAAHHAAAAAAAAAAAA!!!!

Shawn has the power to become friends with even the wickedest person. Whether it's because of his own understanding of evil and darkness is unknown.

Berserk Psychosis: Shawn can willingly turn on and off the logical part of his brain, bringing him in and out of a rambling nonsensical state.

Above all, Shawn is a survivor

Beautiful women cause Shawn to go numb at the knees

The Joker is his absolute hero. Preferring to follow his ideals more than his methods, Shawn has found that the Joker really has a broad understanding of how the world works.

Like Bruce, Shawn also has the Joker in his head, the difference being that they're actually best friends.

Retrieved from "https://dc.fandom.com/wiki/User:Bartlebycs?oldid=1876208"
Community content is available under CC-BY-SA unless otherwise noted.