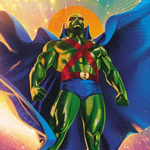 Scar just underneath my hairline

I haven't decided yet

Not much to know. I'm a DC fan. My first exposure to DC was Young Justice and my favorite character is Martian Manhunter.

I can drink an entire gallon of whole milk (2% is disgusting) in one sitting. I also have the ability to over-complicate things.

Although I have a higher pain tolerance than most, I still suffer from the weakness of an average human. Gunshot wounds, migraines, etc.

I am currently reading a mix of new and classic series. I generally prefer more recent series (published within the past five to seven years), but I will read an older serial if I am intrigued by it.

I only collect trades. I don't read current series by the issue in the event that the series doesn't end well. That way, I won't be in a couple hundred bucks for a series that isn't great.

Retrieved from "https://dc.fandom.com/wiki/User:Bobbie_goodman?oldid=2074579"
Community content is available under CC-BY-SA unless otherwise noted.