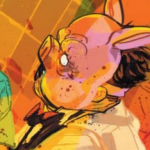 Welcome, I am Darkknight2149. I am a fan of comic books and their various adaptations (yes, even Marvel; I'm not biased). On this Wiki, I tend to go where my interests take me. Since I have an extensive knowledge of the DC Universe, I often create pages for characters that previously didn't exist (by which I mean the pages didn't exist). For example, the classic version of Merlyn the Dark Archer appeared in the New 52, despite being overshadowed by Tommy Merlyn. Therefore, I created the Merlyn (Prime Earth) page. I have also been known to edit articles pertaining to Gotham and the now defunct Beware the Batman, as I am a fan of those shows who follows each of them religiously (seriously, they're criminally under-rated; you don't know what you're missing!).

Some of my favourite DC comics include Watchmen, Batman: The Dark Knight Returns, Batman: Arkham Asylum (better than the video game, which is also a masterpiece), Batman by Scott Snyder, Neil Gaiman's Sandman, Green Lantern by Geoff Johns, and Hellblazer (Vertigo run).

My favourite DC films are The Dark Knight, Batman '89 and Watchmen (Director's Cut and Ultimate Cut only). My least favourite are Supergirl and League of Extraordinary Gentlemen.

Retrieved from "https://dc.fandom.com/wiki/User:Darkknight2149?oldid=2520079"
Community content is available under CC-BY-SA unless otherwise noted.