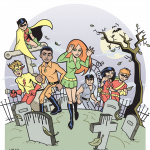 Nathaniel "Nate" ??? was born in Laurel, Mississippi, USA. As a child, Nate was fascinated by the extraordinary. He liked to daydream and imagine worlds of fantasy, where anything can happen. He quickly became fond of a particular television show that came on in the afternoons after he came home from school - Teen Titans. This was his gateway into DC Comics. Soon after, he found a Justice League VCH volume at Blockbuster, which he immediately begged his parents to rent for him. After watching the League unite in the series' first few episodes, Nate's enthusiasm for superheroes increased tenfold. He continued to watch and read stories about good triumphing over evil, but he always kept a passion for DC Comics above all other franchises because DC Comics was his first.

Because these television shows, movies, and books sparked his creativity, at nine years old Nate began writing his own little stories. They were not great stories, but it was a start for him to realize that he wanted to be a novelist when he entered the adult world. This was his plan up until Nate's high school years. He suddenly realized that, while he would always have a passion for writing fiction, he would need a steady-paying job while he wrote on the side. Nevertheless, Nate wanted to stay close to novels, so he decided that becoming a book editor for a publishing company would be a great way to accomplish that.

Nate had a substantial academic record. He applied himself to his studies, spending four hours reading his textbooks and notes almost every day after school to maintain his status in his high school's top 5 in academic rankings. In doing so, Nate received a presidential scholarship to his university of choice. There, Nate started out as an English major. Later, he learned that book editing is a career choice with a negative job outlook, so he would need every advantage to land the job he wanted. Upon conducting some research, Nate learned that publishers are looking for people with either English or Public Relations degrees to become book editors. Nate's solution was to add Public Relations as a second major to give him the edge he would need. Using what he learned about analytical and editorial writing, Nate landed a job as an editorial assistant with the University Press of Mississippi (UPM) at the start of his third year in university.

During his senior year at university, Nate decided to add another skill set to his résumé by becoming the feature editor for his university's newspaper. With news being another facet of publishing, he took on this job hoping his experience in news would further help him land a job as a full-time editor in the future. In addition to the newspaper job, for his senior year, Nate has also begun working on his senior thesis. Focusing on his English major for this thesis, Nate is conducting an expanded literary analysis on Tom King's Omega Men: The End Is Here, where he incorporates his passion for DC Comics into his study. In his thesis, Nate argues that King uses Omega Men to simultaneously justify and critique U.S. military involvement overseas in a post-9/11 world. He doesn't promise this thesis would intrigue everyone, but he is confident it will be thought-provoking enough to allow him to graduate.

Nate has the appropriate strength for a human of his height and weight who engages in occasional exercise.

Equipment: Nate has seven objects that he never leaves the house without, which he lists in his head before closing the door: his wallet, watch, phone, keys, headphones, comb, and ring.
Transportation: 2004 Dodge Stratus
Weapons: Nate follows the belief that the mind is one's greatest weapon, and he is willing and ready to use it as he needs it.

Retrieved from "https://dc.fandom.com/wiki/User:N8THGR852?oldid=2552609"
Community content is available under CC-BY-SA unless otherwise noted.