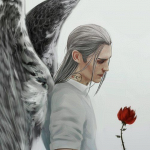 He was an ordinary person working in a psychiatric dispensary until he found an old mobile phone on the street that God contacted him and appointed Phenobarbitalum him a messenger.

Retrieved from "https://dc.fandom.com/wiki/User:Phenobarbitalum?oldid=2505547"
Community content is available under CC-BY-SA unless otherwise noted.