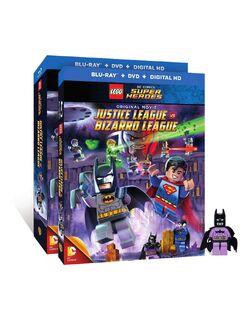 LEGO DC Super Heroes: Justice League vs. Bizarro League is out soon, but now YOU have a chance to win tickets to the New York premiere on January 24, 2015! The screening is scheduled to start at 1:00 pm at The Paley Center for Media (25 West 52nd Street in New York City). The event will include a post-screening panel discussion, special prizes for kids in attendance, photo opportunities with LEGO® DC Comics Super Heroes standees, and an autograph signing on collectible posters.

Slated to attend the event are Troy Baker and James Arnold Taylor, the voices of Batman and Flash, respectively, and filmmakers Brandon Vietti and Jim Krieg. Additional talent will be announced as confirmed. Free tickets are available and all you have to do is send the first & last name of the entrant, a valid email address, and how many tickets are being requested to LEGOBizarroNY@gmail.com.

Simple, right?? Tickets to the event will be distributed on a "first come, first served" basis, and fans will be notified via email. If you're excited for the movie, check out some more screenshots of what's to come!