Order of the Van Helsings

Now if you'll excuse me... for years we've fought fire with fire, and it never worked. So now we try something different. We fight fire with a nuclear warhead. And thanks to your "pal," we estimate nearly sixty percent of the Earth's vampire population is gathered here. That's the most ever slain by one platoon of Van Helsings. I'm sorry we didn't get a change to talk more. I quite enjoyed it. Unfortunately, we won't be talking again any time soon. Death to the hellspawn.

His name unknown, Van Helsing is the latest to take the title, having it by the early 21st Century as the leader of the Order of the Van Helsings.[1]

Rise of the Vampires

Main article: I, Vampire: Rise of the Vampires (Collected)

Van Helsing and his Order were contacted by Professor John Troughton and Tig Rafelson, who arrived to their castle. Hearing of Andrew Bennett's desire for them to meet and of Bennett's increased strength beyond that of most vampires, he had the two poisoned to test the veracity of their claims, and they were brought on one of his planes to head for Utah.[1]

On the plane, he spoke with the two, questioning their allegiance to Andrew despite his refusal to kill Mary, Queen of Blood. Staunch in his beliefs, he admitted to the Order's plan to kill all of the 'supers' of the world after they finish with vampires. As the plane reached Utah and began firebombing upward of sixty percent of the vampires on Earth that had been brought together by Mary and Andrew, he jumped out with his supernatural pendant, letting the plane crash with only Tig and John on board.[2]

In the midst of the massacre brought about by his supernatural pendants to Anubis, Van Helsing spoke with Andrew, who was disappointed that rather than allow an eternal stalemate between the two sides, Van Helsing had decided to kill all vampires. When bombs on the crashed plane Tig and John were on exploded, Andrew tortured him, tearing him apart twelve times before the two, alive, could get him to stop, with John decapitating the dismembered leader. His body getting back up in the midst of the conversation, headless, Tig sliced him in half with a sword at the waist, because "[d]ude tried to blow [her] up."[3] 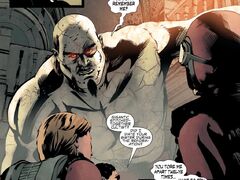 Van Helsing after his augmentation

Whether reanimated or having never been dead in the first place, Van Helsing was put back together by the Order, augmented into a hulking giant's physique, and returned to Castle Van Helsing. When Andrew Bennett assaulted the castle alongside his vampire lieutenants Charles Thompson, Mishkin, and Tig, Van Helsing attacked him, attempting to kill him without any success in spite of his highly augmented strength.[4] Ultimately, when he entered the Armory in the Egyptian Book of the Dead, he was killed when Andrew tore his head from his body, then slammed down on the godly magic of the brick that was at the top of the Tower of Babel.[5]

Retrieved from "https://dc.fandom.com/wiki/Van_Helsing_(Prime_Earth)?oldid=2796740"
Community content is available under CC-BY-SA unless otherwise noted.