You love the cold, Victor. Even if you did bring her back, you'd end up destroying her. Because you love an idea, Victor. An obsession. And that I do understand.

Victor Fries, aka Mister Zero and Mister Freeze, is a cryo-gun wielding villain of Batman.

Victor Fries was born in Lowell, Nebraska. As a boy, he and his mother Lorraine would enter the city's annual snowman contest at the first snow. On one such occasion, they were crossing a frozen lake when his mother fell through the ice. Though she survived the experience, she was never the same. For a year, she was confined to a wheelchair with severe brain damage. When the snowman contest came that next year, she had become such a burden on him that he led her across the same frozen lake, and allowed her to break through the ice again and drown.

Years later, Victor had written his doctoral thesis on the first case of cryogenic stasis; that of Nora Fields. He became so obsessed with her that he believed he was in love with her, and that they were married. Though Batman attempted to disabuse him of the delusion, Fries continued to try to steal the woman's body back, even though he had never actually met her outside of her cryo-tube. In fact, she was old enough to be his grandmother.

It was during one of his obsessive attempts to cure his "wife" that Fries became angry with his employer Bruce Wayne, and threw a chair which ruptured a pipe and exposed him to cryo-fluid. Disfigured and mutated, Dr. Fries was forced to build a protective suit to survive at regular temperatures. Adopting the name "Mr. Freeze", the former scientist went mad and constructed a Freeze Ray to terrorize Gotham and get Nora back.

During Batman's second year as a vigilante, Mr. Freeze joined in on the "War of Jokes and Riddles" between the Joker and the Riddler for the right to kill Batman. Freeze was recruited into the Joker's army and helped fight against the Riddler's forces for weeks. Eventually, Batman himself was forced to focus his efforts on one side to minimize casualties and was forced to ally himself with the Riddler. Mr. Freeze was taken out by the Bat and sent to Arkham Asylum.

Before Batman began investigating the mysterious Court of Owls, Fries was contracted by the secret criminal organization to design a variant of his cryo-suit's coolants to help them keep their Talons in a state of stasis until they were needed and could be resurrected again. He was told the invention was for their shared desire of the downfall of Batman and Fries obliged.

At 8:18 PM on the Night of the Owls, Mr. Freeze was among the many targeted by one of the Court's Talon, having discovered the Court double-crossed him. Mid-battle between Fries and the assassin, the Red Hood intervened, hoping to end the conflict. However, because of Freeze's arrogance and hesitance to work with one of Batman's allies, the Talon escaped. With Red Hood going after the Talon, Starfire and Arsenal were left to fight the icy villain. Fries was defeated and delivered to the GCPD by Red Hood.[1]

Quickly brought to Arkham Asylum, Fries did not remain in captivity very long. A few minutes past midnight, Freeze wasted no time in escaping and used only a frozen crayon to escape his cell and return to Gotham. Retrieving a spare Cold Gun from the Penguin, Mr. Freeze attempted to leave the city forever with his beloved, cryogenically frozen Nora. The villain's attempt was foiled by the heroic team of Nightwing, Robin, and Batman, disabling the villain and once again returning him to Arkham for the second time that night.[2]

Sometime shortly after the death of Robin, Fries battled Batwoman and Hawkfire, who were trying to recover one of his cryoweapons. After being frozen in a block of ice, Hawkfire exploded the block with her flamethrowers, sending a spike of ice through Fries's calf and crippling him, ensuring his capture.[3]

When the Crime Syndicate invaded Earth and seemingly killed the Justice League, multiple prisons around the world were ripped open, allowing the criminals inside to run rampant. The lunatics from Arkham Asylum, freed from their cells and with no Batman to stop them, decided to divide Gotham between themselves, each super villain getting a district of the city. However, Bane was not a fan of this arrangement, instead wanting Gotham all to himself, and recruited the prisoners of Blackgate Penitentiary to follow him into battle against the Arkhamites in what would later be called the "Arkham War". 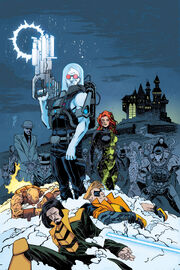 Mr. Freeze, siding with his Arkham brothers, was given the task by Scarecrow to work on reviving the army of Talon assassins that they had just stolen from underneath Blackgate. Partnering up with Mad Hatter to both revive and mind control the killer zombies into working for the Arkham side, the two criminals stayed at the base while the two sides brawled in the streets.[4]

Fries took a break from his science experiments to go on patrol with Clayface when the Rogues arrived in the war-torn Gotham. The icy villain tried to convince Weather Wizard to create a blizzard in Gotham with his powers, giving Mr. Freeze an edge in the war and practically a guaranteed win for the Arkhamites. However, the Rogues wanted no part in what they thought was a futile war and, therefore, were met with resistance from the two maniacs. While the Rogues escaped Gotham, Freeze and Clayface were left in the war zone, fighting off Black Mask and his False Face Society.[5]

Finally reviving the Talons, the Arkhamites sent the assassins to lay siege on Bane's forces but, between him and his own Talon, the Blackgate side withstood the attack. In a final effort to beat Bane, Scarecrow drugged his Arkham Army by lacing their celebratory wine with Venom, turning Freeze and the other Arkhamites into hulking super strength giants.[6] Even with their new found strength, though, the lunatics were defeated by Bane, a much more experienced Venom user, who victoriously stood over his enemies, declaring himself the winner of the Arkham War.[7]

When the Joker returned to Gotham with an endgame for Batman in mind, the city was put into a state of chaos. The clown infected the population of Gotham with a special variation of his Joker Venom, essentially making every citizen of Gotham a mindless laughing zombie.

Fries, incarcerated in Arkham Manor, was freed during Joker's takeover by Dr. Jeremiah Arkham, impersonating the clown and taking Joker's plan a step farther by infecting his asylum with the toxin as well. Mr. Freeze and a couple other villains, because of the high concentration of chemicals in their blood already, seemed to have a natural resistance to the toxin and worked together to escape the asylum past the hordes of Jokerized inmates and employees.[8]

Finally arriving in Gotham, the escaped criminals discovered the city was just as mad as the manor. Finding Killer Croc and Penguin, Freeze, Poison Ivy, Scarecrow, Clayface, and Bane clung together in the anarchistic city. The group, knowing that Joker had gone too far this time, agreed to help Batman and his allies as crowd control when the Bat went to finally confront the Joker in center city.[9] Joker, anticipating the attack, tried to release an even more potent version of the virus on Freeze and the other traitors, but Batman managed to administer a cure through their gas masks before his and the Joker's apparent death in the caves below Gotham.[10]

Retrieved from "https://dc.fandom.com/wiki/Victor_Fries_(Prime_Earth)?oldid=2738617"
Community content is available under CC-BY-SA unless otherwise noted.