Of course, I know about bad luck... that's one of the lessons that this city teaches us all, eventually.

Victor Fries, primarily known as Mister Freeze and before that Mister Zero, is a scientist skilled in cryonics.

With his Ice Gun, he is a recurring foe of Batman and his allies in Gotham City.

A scientist, whose name remains unknown, adopted the identity of the criminal Mister Zero after he suffered an unfortunate accident that changed his physiology, forcing him to live in environments below zero temperature. He was experimenting with a concentrated freezing solution in order to create an ice gun and he was accidentally exposed to the solution. In order to be able to go out to the normal environment, Zero created an air conditioned costume, which helped him remain in cold temperatures, even in hot climates. Using this equipment, Zero gathered a small gang and started a crime spree in Gotham City, stealing mainly diamonds and other precious jewels. Mr. Zero was eventually confronted by the local vigilantes, Batman and Robin, who were unable to stop Zero as they couldn't stand against his cold weapons. The Dynamic Duo were eventually captured by Zero and brought to his secret cold hideout, near the mountains. Trapped in blocks of ice, Batman and Robin learned Zero's plan to steal a large collection of gems and using their cages as weapons, Batman broke a steam pipe in Zero's hideout, causing steam to fill the entire place, melting the ice away and apparently curing Zero from his ailment. After this, Batman and Robin were able to capture the whole gang and brought Zero to the authorities.[1]

Second Cryo-Suit
After years of inactivity, Zero returned to crime, but this time, he changed his alias to Mister Freeze. Freeze's condition had apparently returned and he was forced to remain in cold temperatures once again. In this second exploit, Freeze redesigned his Cryo-Suit and also improved his cryothermal gun. With a new gang, he started a new series of crimes and stole valuable pieces of art. Similar to his first criminal activities, Freeze was eventually stopped by Batman and Robin.[2]

Long after this, Freeze became part of a mock criminal trial,[3] after which he changed his Cryo-Suit for one that allowed him more mobility. Freeze eventually fell in love with a woman called Hildy. In order to slow her aging process, Freeze set out to recreate the accident that transformed him. Using wealthy people in Gotham as test subjects, Freeze experimented on them, but all the efforts resulted in failure and the victims were turned into frozen zombies, who followed Freeze's command. His new crimes alerted the police and Batman, who confronted Freeze and was only able to defeat him when Hildy showed her true intentions and betrayed Freeze, only to be encased in solid ice when her plan backfired.[4] Freeze's next plan consisted in freezing Gotham City by removing all the heat and transporting the energy to the neighboring city of Metropolis. Freeze was unable to accomplish his goal as he was stopped by Batman and Superman.[5] During one last attempt to freeze Gotham entirely, Mr. Freeze created a large ice cannon. After robbing a bank, Freeze was confronted by Batman and the new Robin, who managed to defeat him with help from Vicki Vale and Julia Pennyworth, who Freeze had previously captured.[6]

As a child, Victor Fries was fascinated by freezing animals as a hobby he developed to escape the pressures of his brutal, control-freak father. His parents, horrified by his 'hobby', sent him to a strict boarding school, where he was miserable, feeling detached from humanity. That winter, when the other children went home for the holidays, Victor discovered that his parents had disowned him. He was thought of as in embarrassment, a mistake to be filed away and forgotten, and he never saw them again. In college, he felt that he may never feel a warm touch, but then came Nora, a beautiful athlete, with whom he fell deeply in love with and ultimately married. He later got a job teaching cryogenics at the local college.

Nora later fell terminally ill with a rare cancer. Fries left teaching and took on a job working for a large drug company called GothCorp, run by the ruthless Ferris Boyle, so he could find a cure. Using his great intellect and passion for cryogenics, Fries discovered a way to put Nora into cryo-stasis using company equipment, hoping to sustain her until a cure could be found. Boyle found out about the experiment and canceled the funding, but Fries continued with the project, leaving Boyle in huge debt. Boyle attempted to have Nora brought out of stasis and overruled Fries' frantic objections, during which a struggle ensued. As a result, Fries became engulfed in his own cryogenic coolants and was left for dead. Fries survived, but the chemicals had altered his body chemistry and his body temperature was lowered dramatically; he could now only survive at sub-zero temperatures. Fries escaped, unnoticed with the frozen Nora. In hiding, he invented a special refrigeration suit to stay alive, and used cryonic technology to create a powerful gun which fired a beam that froze any target within its range.[7]

With this technology, he became a criminal called Mr. Freeze with a taste for diamonds and revenge.

His first act as a costumed criminal is to take revenge upon Ferris Boyle, a plan with which Batman interferes. Mr. Freeze fired his freeze-gun at Batman, but he dodged, causing the beam to shatter Nora's capsule. Freeze blamed Batman, and swore to destroy whatever the Dark Knight holds dear (mainly Gotham City, and eventually Robin). Mr. Freeze once joined a team of Gotham's "costumed freaks" lead by Two-Face. The group attempted to destroy the remnants of Carmine Falcone's Crime Family. During the Columbus' Day Massacre, Freeze was assigned to the removal of Edie Skeevers. Mr. Freeze and the others eventually fought Batman and Robin in the Batcave, after a botched assassination attempt on Two-Face by Hangman.

Initially locked in Arkham Asylum, Freeze was eventually transferred to the Gotham State Penitentiary, from where he escaped and attempted to steal technology from S.T.A.R. Labs until he was stopped and returned to prison by Batman.[8]

After this series of encounters with Gotham's vigilantes, Freeze decided to hibernate inside a block of ice created with his own weapons. His frozen body was eventually found in the Gotham River, where the police pulled him out and took him to the morgue, assuming there was a corpse inside the ice. When the ice thawed, Freeze crawled out to the cold room, where he was stopped by Detective Montoya and Batman. Freeze was then arrested and taken away in an ambulance with the necessary equipment to keep him alive.[9] 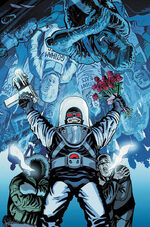 Freeze was eventually contacted by Penguin and he agreed to work for him as a "cleaner". However, Freeze's unstable mind caused him to go overboard and started killing Penguin's people.[10] Freeze's mind was having a regression after his treatment at Arkham and he kidnapped a pregnant girl, believing that she was her late wife, Nora. Freeze was then attacked by The Ventriloquist's henchmen and Batman had to step in to save him.[11] Freeze returned to his hideout to recover from the damage done, but the kidnapped girl tricked Freeze into hugging her, causing him to be paralyzed due to her warm body affecting his system. Batman arrived in time to rescue the girl and left Freeze to be taken by the authorities.[12]

Main article: Batman: Under the Hood
When Black Mask became the new crime lord in Gotham, he approached Freeze and offered him to join his gang; an offer that Freeze accepted on the condition that he was given a new Cryo-Suit.[13] 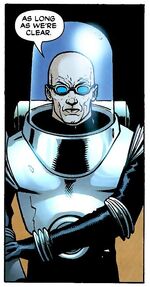 The New Cryo-Suit
The construction of a new cryo-suit was slow as Freeze kept killing the technicians that Black Mask provided him, but eventually Freeze was given a new and improved cryo-suit, sealing the deal.[14] Once under Black Mask's command, Freeze was told to recover anything he could from the stolen shipment at the Gotham Harbor.[15] However, Black Mask's plans were foiled by a new criminal called Red Hood, forcing the crime lord to send Freeze to kill Red Hood and recover the Kryptonite shipment for him. Freeze found Red Hood and a fight between them started until Batman and Nightwing showed up and stopped their fight. After this, Freeze used his cold gun to escape the place.[16]

Once, in the hopes of reviving Nora, he allied himself with the Secret Society of Super Villains, fashioning for Nyssa Head a sub-zero machine in exchange for the use of her own Lazarus Pit. He attempts to restore Nora to life without waiting for the adjusting needed in the pool chemicals, however; she returns to life as the twisted Lazara, and escapes. She blamed her husband for her plight and estranged herself from him (crippling his sanity even more).[citation needed]

Freeze was eventually approached by Hush, who asked him to create a machine that could preserve a beating heart out of the body.[17] Freeze created such machine and asked a large amount money in exchange.[18]

Upon returning to Earth, Freeze started attacking Intergang, to take back the control of Gotham. For this purpose, he made an alliance with Killer Croc and together they attacked the members of Intergang at the Iceberg Lounge.[19]

Batman is Dead
Main article: Batman: Battle for the Cowl

After Batman's death, most of the Arkham inmates were freed by a new Black Mask. Freeze was among them and he started working on a project called Ice-X Protocol when the GCPD tried to capture him. He stunned them with his gun and captured Gordon, taking him to his secret lair. Gordon managed to break free and defeat Freeze by causing an explosion that weakened Freeze. After his capture, Freeze was taken to Iron Heights prison.[20]

Black Mask attempted to control Mr. Freeze by implanting a device in his head. He escaped Black Mask and tried to perform brain surgery on himself to remove the chip, but was captured and imprisoned by the Outsiders. The chip was eventually removed by Owlman.

He robs a diamond store and is stopped by Nightwing. He later teams up with Penguin to attack Poison Ivy. It is clear that he has lost motivation due to his separation from Nora.

Retrieved from "https://dc.fandom.com/wiki/Victor_Fries_(New_Earth)?oldid=2728713"
Community content is available under CC-BY-SA unless otherwise noted.