Victor Stone is Cyborg, a founding member of the Teen Titans who uses his robot body to fight crime.

Cyborg has given multiple different possible "orangins" <sic> for how he gained his powers.'

Cyborg once claimed that he was the sole survivor of a dying planet. His parents sent him off in a rocket that landed in a small farm town on Earth, where he was raised by two old farmers. Cyborg learned that, due to Earth's yellow sun, he was imbued with superpowers that modern humans did not have. Using these powers to fight for good, he became "Cyborg".

Despite Cyborg telling this story himself, Robin pointed out that the story was untrue and just a parody of another hero's origin story. [6]

In a version of the Teen Titans' collective origin story, Victor Stone was a young, powerless athlete when he first met the hero Robin. Robin was forming his own super-team in Jump City and was inviting heroes to audition. Victor wanted to audition but was ignored by Robin, who didn't see him as an applicable crimefighter. Eventually, after Victor pestered him enough, Robin allowed him to try out anyway. 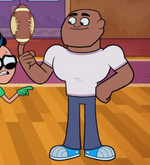 Victor before his accident

At the auditions, Robin analyzed each of the heroes' speed, combat skills, and teamwork skills. Victor, as well as Raven, Starfire, and Beast Boy were determined to be unfit superheroes, making Robin lose his composure around them, and kicked them out of Titans Tower. Robin then announced that the Teen Titans would be comprised of himself, Kid Flash, Aqualad, Speedy, and Bumblebee. However, Robin had proven he was an unfit leader in the other teenagers eyes, and they voted to kick him off his own team, replacing him with Kid Flash as their leader. [7]

Robin reconnected with the other four teenagers he kicked out of the auditions and, feeling a sense of comradery having all been rejected from the team, decided to form a team themselves. Robin's Titans challenged Kid Flash's Titans to a competition - winners keeps Titans Tower, losers leave Jump City for good; they agreed.

The first part of the competition was a combat challenge to defeat a highly-advanced, deadly combat android. During the fight, Robin convinced Victor to fight the robot without any powers, causing Victor to become seriously injured. Robin's Titans rushed their teammate to the hospital and, two hours later, returned with their newest member: Cyborg. With his new robot body, Cyborg immediately destroyed the combat robot, winning the round for Robin's Titans.

When Cyborg and the other Titans appeared to be doomed to lose, they abandoned the competition and barricaded themselves in Titans Tower. However, Kid Flash was too quick and snuck inside before hem. Though Robin admitted he should probably accept defeat and concede the tower to the speedster like a gentleman, he instead bashed Kid Flash's knee in with his battle staff and threw him out the window. Kid Flash, Aqualad, Speedy, and Bumblebee, having been kicked out of Jump City, decided to form their own team on the east coast.

In an alternate story of their origin, Robin recounted that he decided to form the Teen Titans when, after going solo, he wanted a collection of his own sidekicks that he would called "teammates" to be polite. He went on a website that collected information on the world's superheroes and villains and began assembling his team.

When looking for someone to be the "muscle" of the team, Robin came upon Cyborg and went to visit the hero in Detroit. Cyborg, having been recently disfigured in an accident before meeting Robin, was heartbroken that his athletic career was over, but Robin offered him the oppurtunity to do some real good as a member of his super team. Though Cyborg thought he meant the Justice League, Robin clarified he meant a new super team, to which Cyborg disappointedly agreed anyway.

After Robin contacted three other possible members, they all came together to stop a robbery in Jump City, officially forming the Teen Titans.

Though each of the members liked this version of the story, they didn't think anyone would ever believe it was true. [9]

Retrieved from "https://dc.fandom.com/wiki/Victor_Stone_(Teen_Titans_Go!_TV_Series)?oldid=2875539"
Community content is available under CC-BY-SA unless otherwise noted.