Void is a super-hero and member of the Wildcats in the Wildstorm Universe. Originally the Russian cosmonaut Adrianna Tereshkova, she gained powers when she was bonded to one of Omnia's Orbs of Power. Tereshkova is granted teleportation and precognition by the Void entity, allowing her to transport her team and predict their battles. Having predicted the need for them, she formed the Wildcats by reawakening Lord Emp. Tereshkova eventually died, forcing Jack Marlowe to bond with the Void for a short time. Tereshkova's successor was a paramedic named Nikola Hanssen. There has also been a third Void seen as part of New Wildcore. Void was created by Brandon Choi and Jim Lee, first appearing in the WildStorm publication WildC.A.T.s #1. (1992) 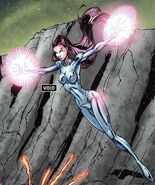 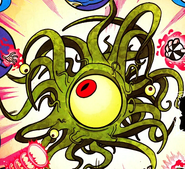 The Void
Other Media
The Brave and the Bold