None · formerly Guardians of the Universe

You little men have been very, very busy messing up the universe.

Volthoom, also known as the First Lantern, is the first creature in the Multiverse to ever wield a power ring. He is the most powerful Lantern in existence, possessing nigh-unlimited strength. He is an enemy to all of the Lantern Corps and the Guardians of the Universe.

Volthoom was born one millennia into the future of mankind, on Earth 15 of the Multiverse. He and his mother were scientists who discovered the Emotional Electromagnetic Spectrum, a multiversal force which was powered by the life of every being in the Multiverse. By harnessing this spectrum, Volthoom and his mother were able to create the Travel Lantern, an experimental device which would allow its user to travel across time and space. Eventually an evil race of alien invaders came to Volthoom's home planet and obliterated the civilization. In the final moments of his planet, Volthoom was told by his mother to take the Travel Lantern and find a way to save their people. Volthoom left as his mother was subsequently crushed by a building.[1]

Volthoom spent weeks trying to master the complicated device, as he was constantly thrown into dangerous environments by the sporadic nature of the Travel Lantern. Volthoom became the acolyte of the spectrum as he travelled through time and space looking for a solution to the death of his world. On Earth 17 scientists used the spectrum to resurrect plant life, but since he didn't need this he moved on. On Earth 47 they used the spectrum to create beautiful music, once again Volthoom didn't need this so moved on. On Earth 3 Volthoom made a pact with a sorcerer named Mordru to create a power ring out of a piece of his soul, however after a dispute Volthoom left Mordru and Earth 3 behind. This ring became known as the Ring of Volthoom, and was used of the evil Earth 3 version of Green Lantern known as Power Ring.[1]

Eventually, Volthoom found what he was looking for on Earth 0, the main universe in the Multiverse. During the year 10,000,000,000 B.C., Volthoom discovered the Maltusian species on the planet Maltus. These Maltusians were an incredibly intelligent species who sought to learn the secrets of the spectrum. The Maltusians planned to pour all of their emotions into a new battery they called the Great Heart, as they believed losing their emotions would lead to greater discoveries. Upon successfully completing the ritual, a power ring emerged from the center of the Great Heart. Volthoom slipped this ring on and became the First Lantern in the Multiverse.[1]

Volthoom became a figure of law and order in the universe of Earth 0, exacting judgment on criminals everywhere. Volthoom knew the ring was the device that could help save his world, but it needed to be perfected. The Maltusians implanted the Great Heart into Volthoom's chest which gave him direct access to the spectrum. Volthoom made a deal with the scientists which would allow him to take the ring home and save his planet, but only if he helped them perfect the technology of the spectrum. Eventually, the spectrum began to affect the mental health of Volthoom, ultimately leading to his insanity and an attempt to kill the Maltusians.[1]

In order to secure their inventions, the Maltusians destroyed his Travel Lantern, thus trapping Volthoom in the Prime Earth universe.[1] After killing thousands of Maltusians as a form of revenge, Volthoom was defeated by the seven "Proto-Green Lanterns"[2], the Great Heart ripped from his chest, and the first Power Ring taken away. Soon after, the Guardians imprisoned Volthoom in an unbreakable chamber (known as the Chamber of Shadows), and wrote him out of their history. A number of Maltusians (now named 'Guardians') remained behind to ensure that the First Lantern was kept imprisoned and became known as The Hidden Ones.

Wrath of The First Lantern 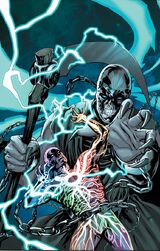 Volthoom in the grasp of Nekron

After the War of Light, the Guardians put Volthoom in lesser constraints as part of a plan to replace the Green Lantern Corps, whom they believed to have failed as an interstellar police force due to their emotions and free will. They used Volthoom's DNA to create a horde of infectious warriors. This horde, called the Third Army, almost assimilated all intelligent life in the galaxy, but was stopped by rogue members of the Green Lantern Corps.

During a fierce battle on Oa, the Guardians drained more power from Volthoom, but this proved to be their undoing when they inadvertently freed the First Lantern. Volthoom vengefully captured the Guardians and then began siphoning energy from multiple bearers of power rings, in the hopes of gaining enough energy to rewrite the entire universe.[3] However, he faced the combined might of all the Lantern Corps of the Emotional Spectrum. Volthoom was weakened by the embodiment of death, Nekron, and was separated from his connection to the Emotional Spectrum by Hal Jordan, leaving him completely powerless before being killed by Nekron.[4]

A couple of years later, and due to his direct connection to the Emotional Spectrum and his inability to ever permanently die, he found himself back in the realm of the living. [5] He then manipulates Frank Laminski, a former pilot with dreams of becoming a Green Lantern but was rejected by a Green Power Ring, into finding and taking the Phantom Ring from Green Lanterns Simon Baz and Jessica Cruz. Volthoom incapacitates the Guardian, Rami, and soon leaves with Frank who had acquired the Phantom Ring.

Volthoom wakes Rami up, addressing him as an old friend. Volthoom blames Rami for making him the being he is today, revealing that he wanted to return from where he came from but was instead used by the Guardians for their experiments in harnessing the Emotional Spectrum. The two begin to fight one another, with Volthoom claiming that Rami and the Guardians of the Universe lacked knowledge, and that without him, the Guardians wouldn't have been able to tap into the Emotional Spectrum and/or create the Green Lanterns. When the Green Lanterns are able to remove Phantom Ring from Frank Laminski, Rami arrives and reveals he was able to imprison Volthoom's spirit/essence within an orb. However, the truth is that Volthoom trapped Rami's spirit within the orb then proceeded to inhabit the latter's body. In Rami's body, Volthoom explains that he will train Simon and Jessica and that the Earth is in goods hands.[5]

According to Rami's journals, Rami discovered it was Volthoom himself who would destroy his homeworld in Earth 15. When Rami told Volthoom this, Volthoom came to the conclusion that Rami wanted his ring. While Volthoom went on a killing spree, Rami destroyed the Travel Lantern to prevent Volthoom from returning to his reality and destroying his homeworld.[6] Rami then used the remains of the Travel Lantern to forge the first Green Lantern rings.

"I don't want to say he's a villain or a hero," Johns says of the First Lantern, who was introduced in DC Comics' recent Green Lantern Annual. "He's just a being who's targeting our main lanterns, our guys, to see if there's a way that maybe the universe could improve if they made different choices in their lives.

"You'll see why he's called the First Lantern within the story," the writer adds, "but he's someone who's going to take a look at every one of our heroes and main characters and really tear their life apart and rip them open in a way we've never seen before on a very cosmic scale."

"He's a very different ancient powerful character who has a very odd and disturbing point of view on the universe and on humanity and life, and where life can go wrong or go very good," Johns explains. "He's really not a guy who's motivated by revenge not completely or by power. He has it all he's a being who's just very, very inquisitive about life and the choices we make."

Retrieved from "https://dc.fandom.com/wiki/Volthoom_(Earth_15)?oldid=2767142"
Community content is available under CC-BY-SA unless otherwise noted.