My name is Wally West... and I need to be the fastest kid alive.

Wallace West, the third Kid Flash, is the teenage sidekick of the Flash and the son of Daniel West, the second Reverse-Flash. 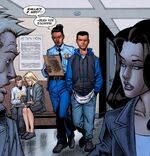 Wally's parentage was a complicated story. Wally, like his older cousin who shares his name with him, was named after their great-grandfather. Wally's father Daniel West hid his true identity from his son, bonding and remaining in the boy's life as his "uncle" rather than his father.

Wally was originally a delinquent; he was disobedient and a troublemaker. When Wally's mother went missing when the Crime Syndicate tore through Central City, his aunt Iris West took him in but even she couldn't keep him out of trouble.[1] 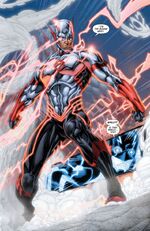 The boy eventually began to ease out of his rebellious nature when he gained an admiration for Central City's hometown superhero the Flash. Wally eventually gained a connection to the mysterious Speed Force, giving him superspeed that was unpredictable and hard to control, when a future version of himself sent his powers through time to his past self before dying.[2] With his new powers, Wally attempted to help the Flash and his aunt in any way he could.

A few weeks later, the Speed Force was interrupted by a device created by Dr. Joseph Carver that created what would be known as a "Speed Force storm" over Central City. Anybody hit by one of the storm's lightning bolts would be granted super speed and a connection to the Speed Force. Among the many civilians that were struck, Wally, too, was hit by a bolt of lightning, cementing his powers and making them more stable.[3] 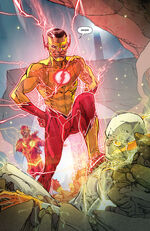 Wally, attempting to keep his powers a secret from his Aunt Iris, worked with the speedster Meena Dhawan, also known as "Fast Track", who helped him to better utilize and understand his gift. Dhawan was apparently killed by the new villainous speedster known as Godspeed, devastating Wally and sending him looking for a new mentor. After working directly with the Flash for the first time to capture Godspeed, Wally was taken under the Flash wing as the new Kid Flash.[4] 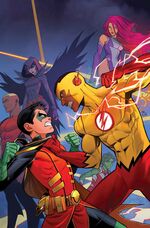 Early into his new career as a superhero, Kid Flash was abducted by Robin and forced to join the latest incarnation of the Teen Titans as they took on the League of Assassins. He decided to stay with the Titans afterwards and began to grow a special friendship with Raven. However, his time with the Titans was cut short after he was tricked by Deathstroke into helping him save his son Grant Wilson from dying. But instead, Deathstroke absorbed Kid Flash's power for his own. Furious, Robin threw Kid Flash out of the Titans for his rashness. As a result, Kid Flash joined forces with Deathstroke's team, the Defiance.

The Color of Fear

He and aunt Iris arrived at home, only to see the Reverse Flash. Wally tried to fight him and was severely wounded. He was then carried by Barry to STAR Labs for healing tech.

Wally ran into Meena, who revealed that she intended to steal the Negative Speed Force from Barry and that she was allied with Black Hole.

Back to Teen Titans / Super Sons of Tomorrow

He narrowly saves Barry from Raijin.

Retrieved from "https://dc.fandom.com/wiki/Wallace_R._West_(Prime_Earth)?oldid=2836032"
Community content is available under CC-BY-SA unless otherwise noted.