The idea for a large scale holding company that operates as a foundation was first conceived by Bruce Wayne after his faithful butler, Alfred saved the lives of Bruce and Dick Grayson and sacrificed himself

Gotham City
The Wayne Foundation is a charity organization run by Wayne Enterprises. For a time, Bruce Wayne lived in its office building's penthouse to be closer to the city.

The idea for a large scale holding company that operates as a foundation was first conceived by Bruce Wayne after his faithful butler, Alfred saved the lives of Bruce and Dick Grayson and sacrificed himself in the process. To honor the memory of the late butler, Wayne decided to start the "Alfred Foundation", of which he became the chairman.[1] The first institution backed by the Alfred Foundation was the Gotham Wax Museum[2] and shortly after, Bruce created the experimental laboratories of research.[3]

When Batman defeated the monster that was once human, Blockbuster, he sent him to the Alfred Foundation's laboratories, hoping that the scientist could find a cure for his current state[4] and he would eventually become part of the staff of the company.[5]

After Alfred's miraculous return to life, Bruce realized that the company's name needed to be changed and so he decided to rename it as The Wayne Foundation.[6] Under the new name, Bruce started several campaings for charity to help those in need.[7]

As chairman of the WF, Bruce investigated the treasurer of the company, Eugene Driscoll and learned that he was involved with larceny and was also planning the murder of Bruce Wayne in order to seize the company's assets and steal millions of dollars. Driscoll was eventually captured by Batman with help from Virginia Jenkins.[8]

When Dick Grayson left Wayne Manor in order to attend Hudson University, Bruce and Alfred decided to move to the Wayne Foundation building. In order to live in there, Bruce changed the executive offices at the top of the tall building into a Penthouse Suite and he started to use it as their main residence and base of operations for Batman's crime-fighting activities. The penthouse had a private elevator that connected directly to the underground parking lot, where Bruce kept his special vehicles.[9]

Bruce's first action as head of the Wayne Foundation, was the creation of a new program called "Victims, Inc. Program" (VIP), which would help the victims of crimes who need financial support. Using this program, Bruce could be aware of crimes recently commited, to later investigate them as Batman.[10] In order to keep up with these investigations, Batman included a concealed laboratory in his penthouse.[11] 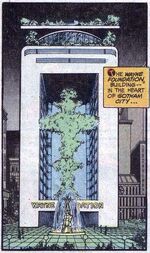 The Wayne Foundation building was majorly redesigned and Bruce moved the secret laboratory to the hidden basement parking lot, where he usually kept the Batmobile. A big ornamental tree was placed in the middle of the building, which served as decoration as well as concealment for hidden passageways installed by Bruce Wayne that connected his penthouse with the underground parking lot.[12] Later, Bruce also made use of an abandoned subway tunnel underneath the building to place a secondary Batcave, where he continued his detective work without having to leave the city.[13] Bruce connected this "Batcave II" with a secret elevator to his private office and penthouse.[14]

The Penthouse was equipped with a series of gadgets and security measures that made the place a perfect safe haven. This advantage was eventually used against Black Spider, who tried to break into the place only to fall victim of the numerous traps in place.[15] However, despite the various security measures, the Joker managed to burst into the place by creating a big explosion that blew the walls of the penthouse in order to kidnap Alfred, as part of a trap for Batman.[16]

Eventually, Bruce Wayne decided to move back to Wayne Manor and he left the Wayne Foundation penthouse unoccupied.[17] A short time later, Batman started the group called the Outsiders and he gave the Penthouse to the two female members of the team, Katana and Halo for them to live. The team also used the underground basement of the building and transformed it into the Outsiders Headquarters.[18] When Batman resigned from the team, he took back the penthouse and the basement and the two locations remained closed.[19]

In order to handle his business affairs as well as as his vigilantism, Bruce placed the offices of Wayne Enterprises in the Wayne Foundation building, which allowed him to work near his penthouse/base of operations.[20] When Bruce decided to resign to his position as CEO of Wayne Foundation and Wayne Enterprises, he handed the job to Lucius, who was already trained to deal with the business affairs of the company.[21]

The foundation has its own building, called the Wayne Foundation Building, which includes a penthouse apartment where Batman lived for a period of time. It also has a secret elevator that leads to a matching Batcave in a secret sub-basement under the building.

Through the Wayne Foundation and the organizations underneath, Wayne not only addresses social problems encouraging crime and assists victims in a way that his Batman persona cannot, but the arrangement also provides a large network of connections in the world of charities. He finds out about the newest trends and newest arts, and at the same time maintains connections to the streets through the soup kitchens and social services groups, which augments his crime fighting efforts.

The Martha Wayne Foundation is a patron and supporter of arts, families, education, and tolerance. The foundation supports and helps to run a number of orphanages and free schools, and provides teachers for those who have learning difficulties. Artists can apply for grants from the foundation to help support them in furthering the arts. The foundation sponsors companies like Family Finders. Family Finders is an organization directed at finding lost people and uniting families. The Martha Wayne Foundation also sponsors and runs dozens of soup kitchens within the city.

Retrieved from "https://dc.fandom.com/wiki/Wayne_Foundation?oldid=2847135"
Community content is available under CC-BY-SA unless otherwise noted.