Aagh! This whole house is a cave. Which is kinda cool. But still...

Stately Wayne Manor, located just outside Gotham City, is the estate of the Wayne Family, lived in by many of Batman's closest allies and family.

Bruce Wayne bought the household right before he started operating as Batman. After he purchased the house, the place became known as the "Wayne Mansion".[1]

The Wayne residence was a simple house located on "224 Park Dr.";[2] on the suburbs of Gotham City.[3] Originally, Bruce Wayne used Wayne Manor as his secret base of operations. Using a secret entrance, he would enter a concealed crime lab where he prepared his arsenal for the cases he had to solve.[4]

There was also a hidden passage underneath Wayne Manor which connected to a seemingly abandoned barn, where Batman kept the Batplane.[5] In order to open the sliding panel to enter the secret passage, it was needed to move an ornamental shield from the wall.[6]

Some time later, Batman built a special hidden room inside Wayne Manor, where he would collect memorabilia from some of his solved cases. This room was only accessible through a six-inch-thick steel door with a combination lock.[7]

Wayne Manor had its own security measures, which included a silent alarm directly connected to Bruce Wayne and Dick Grayson's bedrooms, in case there was any intruder.[6]

Not long after this, Bruce developed his secret underground shelter which he called the Batcave. He used this place to hide his Bat-vehicles and he also moved his secret laboratory and gym from the main house to the underground cave. The secret entrance to the cave was concealed inside Wayne Manor and there was also an alarm connected to the main house in case there was any unwanted person inside the Batcave.[8] As Batman's collection of crime trophies increased, the Hall of Trophies wasn't large enough to keep them all and he also moved it to the Batcave, changing its name to Trophy Room.[9]

Wayne Manor was the main residence of Bruce Wayne and Dick Grayson, who were secretly Batman and Robin. Similar to the Earth-Two counterpart, there was a staircase that connected Wayne Manor to Batman and Robin's secret hideout, the Batcave. However, Bruce decided to upgrade the entrance to the cave and he built an elevator that connected both places and was concealed behind a secret panel in Wayne Manor.[11] All access to Wayne Manor was covered by an electric-eye alarm-system controlled from a sliding panel located in the Library.[12]

Dick Grayson eventually moved out of Wayne Manor in order to attend Hudson University. For this reason, the house became too large for just Alfred and Bruce and they decided to move out of Wayne Manor and settle in the Wayne Foundation Penthouse.[13] Wayne Manor was subsequently given to the Historical Society of Gotham.[14]

Wayne Manor was left abandoned for a long time, until a crazed Ubu, Ra's al Ghul's faithful servant, broke into the mansion, seeking revenge against Batman and started to destroy everything. He tossed furniture out through windows, killed men by pushing them off the rooftop and almost killed Alfred (who was investigating the mysterious acts of vandalism) with a vicious attack on the staircase railing. This started the rumor of "The Monster of Wayne Manor". The Gotham City Police Department started investigating the place and Batman was forced to keep close at all time, to prevent them from finding the secret entrance to the Batcave. When the police left the place for Batman to work alone, Ubu emerged from the cave and the final confrontation took place in the stately manor. After a brief struggle, Batman kicked Ubu, who impaled himself in the splintered railing, ending his life immediately.[15]

Later, Alfred organized a surprise birthday party for Bruce at Wayne Manor and prepared the place alongside Commissioner Gordon, which proved to be a bad idea since the keen eyes of Gordon found enough evidence to suspect the truth about Bruce and his secret.[16] After this, Wayne Manor was mostly used for ceremonies and events organized by Bruce Wayne or the Wayne Foundation.[17]

On certain occasion, the Gentleman Ghost started using Wayne Manor as his private retreat after having taken control of Alfred. When Batman learned of the Ghost's activities, he saved Alfred and forced the supernatural foe out of the Manor, but ultimately failed to capture him.[18]

After years of being unoccupied, Bruce Wayne decided to partially reopen Wayne Manor with a big charity ceremony organized as a costume ball. With guests such as Selina Kyle and Lucius Fox, the event was a success until the Gentleman Ghost crashed the party and attempted to steal from the guests. He was fortunately stopped by Batman.[19] Later, Bruce used the manor to protect a person from the villain known as The Mole and although the kitchen was destroyed by the Mole, the final confrontation took place in the Batcave and the manor was not further damaged.[14]

A few weeks after this event, new reports about a "ghost" in Wayne Manor reached Commissioner Gordon and Batman. While the police conducted a search of the place, Batman convinced them to let him search the place alone, as he feared they would locate the entrances to the Batcave. While investigating, Batman learned that Man-Bat has returned and was using the Batcave as a hideout once more.[20] Wayne Manor was officially reopened when Bruce Wayne decided to leave his Penthouse Apartment and relocate in his old ancestral home. Bruce, Alfred and Dick returned to the old place all together and even though Dick eventually moved out, Bruce and Alfred have lived there ever after.[21]

The last member of the family to live in Wayne Manor was the young orphan boy called Jason Todd.[22] Soon after his inclusion, Man-Bat returned and Wayne Manor was used as the battleground for his confrontation with Batman before the fight was taken to the Batcave.[23]

The construction of Wayne Manor started in the 19th century, but it was left unfinished as the place was considered to be haunted after the death of Joshua Wayne in the caves beneath the manor.[24] The ruins were often used by gunslinger Jonah Hex as a meeting point until the place was claimed back and the construction was finished by Alan Wayne.[25]

Wayne Manor remained the family's household for generations until it was passed on to Bruce Wayne, the last living heir of the Wayne Empire. Due to his activities as Batman, Bruce was forced to find a different area that would provide him secrecy and room for the many equipment he started gathering. After finding a cave system connecting to Wayne Manor, Bruce built a secret entrance behind the grandfather clock and moved all his equipment to the Batcave. Bruce lived in Wayne Manor alongside the family butler, Alfred Pennyworth and a few years after Bruce started his activities as Batman, they were joined by Dick Grayson, Bruce's ward and sidekick as Robin, the Boy Wonder.

Years later, Dick Grayson left Wayne Manor to attend college, and Bruce was took in another orphan, Jason Todd, and adopted him. Jason was later murdered by the Joker, and Bruce removed all evidence that Jason had ever lived in Wayne Manor.[26]

Being so close to Batman's primary base of operations, Wayne Manor was always in constant danger. When the Penguin hired killer birds to eliminate Batman, the animals followed him into the cave and in an unfortunate accident, Tim Drake, the third Robin, opened the grandfather clock entrance and allowed the birds to get inside Wayne Manor and destroy large part of the ground floor until Batman found a way to stop them.[27]

After Bane figured out Batman's secret identity, he managed to break inside Wayne Manor, knocked Alfred unconscious and waited for Bruce to arrive.[28] When Bruce arrived, the fight began and Bane destroyed great part of the living room before taking the fight to the batcave.[29] After this, some of Bruce's private rooms were turned into a medical center with high technology equipment to treat Bruce's injuries.[30] 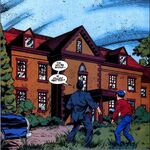 When Bruce and Alfred left the US looking for Dr. Kinsolving, Jean-Paul Valley was left in charge and he assumed the role of Batman. However, due to his mental contraption, he assumed Batman's identity as a crusade and sealed off every entrance to the Batcave, including the secret entrance behind the grandfather clock.[31] Wayne Manor was left inhabitated for months and it became the perfect building for kids and teenagers to vandalize. After a few weeks, there was no window of the house that remained unbroken.[32]

When Bruce recovered from his injuries and returned to Gotham, he learned the truth about Jean-Paul's actions and he burst into the Batcave by tearing down the brick wall that was placed to seal off the secret entrance to the cave.[33] Afterwards, Bruce and Jean-Paul confronted each other in the Manor, causing some minor damages before moving the battle to the Batcave.[34]

Wayne Manor was attacked by Hush after he changed his face to look identical to Bruce Wayne. Once inside the manor, Hush tried to kill Alfred, but he was stopped by Batman's timely arrival.[35] When the Black Glove invaded the Batcave, they used Wayne Manor as a trap to capture Commissioner Gordon.[36] However, he was eventually saved by the League of Assassins who broke into the Manor, looking for Bruce Wayne.[37]

Since Batman's apparent death, the Manor has been nearly abandoned and been left in shambles. Green Arrow went to the place to investigate and learned the hard truth about Batman's fate. Oliver started drinking some of Bruce's liquor when Superman arrived to investigate as well.[38]

After his return, Bruce Wayne started using it again as his main residence.

Retrieved from "https://dc.fandom.com/wiki/Wayne_Manor?oldid=2853450"
Community content is available under CC-BY-SA unless otherwise noted.