Xotar the Weapons Master is a super-villain from the future and an enemy to the heroic Justice League. He is highly intelligent and an expert in all weapons, hailing from the year 11,960. Having learned that he was destined to destroy the Justice League, he traveled back in time and tried to work out which weapon would defeat them. Since then he has returned to plague other incarnations of the League on several occasions, although he has been defeated each time. Weapons Master was created by Gardner Fox and Mike Sekowsky, first appearing in The Brave and the Bold #29. (1960) 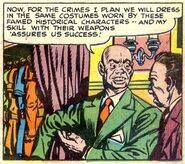 Weapon-Master
Earth-One
Superman/Batman villain
Add a photo to this gallery
Retrieved from "https://dc.fandom.com/wiki/Weapons_Master?oldid=2939962"
Community content is available under CC-BY-SA unless otherwise noted.