The Web is John Raymond, a criminologist turned super-hero who knows martial arts and wears a high-tech suit. He was originally published by MLJ Comics, which was later bought by DC Comics and incorporated into the DC Universe. In the Impact Universe imprint, The Web are a team of heroes in high-tech suits. The original MLJ version of the character fought solo, but in the DCU he is part of a connected secret organization called the Web Host. He has also been a member of the Mighty Crusaders. The Web was created by John Cassone, first appearing in Zip Comics #27. (1942) 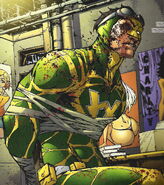