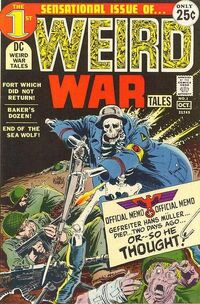 Weird War Tales was an anthology series that told war related stories with science fiction, horror, mystery and suspense. Each issue was hosted by Death, usually depicted as a skeleton dressed in a different military uniform in each issue. Recurring characters began to appear late in the series run, notably the Creature Commandos, G.I. Robot, and the return of The War that Time Forgot (which originally ran in Star-Spangled War Stories). Other stories would often feature robot soldiers, ghosts, the undead and other paranormal characters from different eras of time.

Retrieved from "https://dc.fandom.com/wiki/Weird_War_Tales_Vol_1?oldid=2777789"
Community content is available under CC-BY-SA unless otherwise noted.