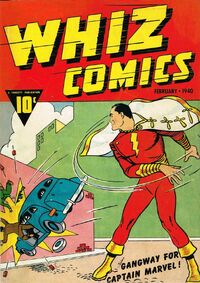 Whiz Comics was an anthology comic book series produced by Fawcett Publications from February of 1940 until June of 1953. Curiously, the premiere issue of the series did not seem to exist, and the title began publication with the spotlight feature Captain Marvel beginning with issue #2, however an ashcan version of the #1 issue, titled Flash Comics has been located. In 1973, DC Comics revived the character of Captain Marvel and his supporting cast, transplanting them to an alternate reality known as Earth-S.

Retrieved from "https://dc.fandom.com/wiki/Whiz_Comics_Vol_1?oldid=2261026"
Community content is available under CC-BY-SA unless otherwise noted.