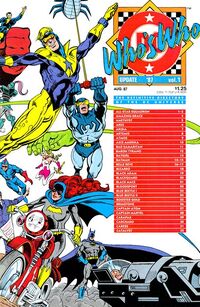 Who's Who: Update '87 was a five-part limited series and an appendix to the twenty-six volume Who's Who: The Definitive Directory of the DC Universe. The series included entries on new characters introduced after the first series went to press, and also included updates on pre-existing characters, often due to retcons attributed to the Crisis on Infinite Earths.

Retrieved from "https://dc.fandom.com/wiki/Who%27s_Who:_Update_%2787_Vol_1?oldid=2775063"
Community content is available under CC-BY-SA unless otherwise noted.