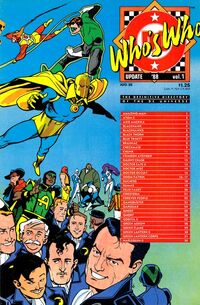 Who's Who: Update '88 was a four-part limited series and an appendix to the twenty-six volume Who's Who: The Definitive Directory of the DC Universe (Volume 1). The series included entries on new characters introduced after the first update went to press, and also expanded on existing characters.

Retrieved from "https://dc.fandom.com/wiki/Who%27s_Who:_Update_%2788_Vol_1?oldid=2775064"
Community content is available under CC-BY-SA unless otherwise noted.