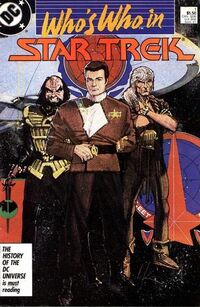 Who's Who in Star Trek was a two-issue reference book series focusing on the characters from the Star Trek universe. The format of the series is similar to that of the other "Who's Who" titles beginning with Who's Who: The Definitive Directory of the DC Universe. Material from the series includes info from the original Star Trek television series, the 1970s animated series, the first four motion pictures, and characters that originated in the Star Trek comic book series.

Retrieved from "https://dc.fandom.com/wiki/Who%27s_Who_in_Star_Trek_Vol_1?oldid=2690920"
Community content is available under CC-BY-SA unless otherwise noted.