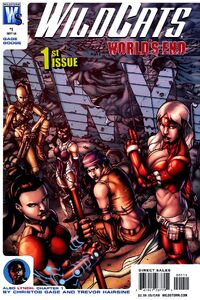 WildCats: World's End is one of Wildstorm's relaunched of the main title series, dealing with the Wildstorm Universe's main heroes coping with post-Armageddon Earth that was first hinted in Wildstorm: Armageddon and following the aftermath of Number of the Beast. Issue 1 was released on July 31, 2008 with the series officially titled as WildCats Volume 5 #1 (Sept. 2008 cover date) in the comic's legal indicia (whereas the series was previously advance-solicited to be titled as WildCats: World's End).

Retrieved from "https://dc.fandom.com/wiki/WildCats:_World%27s_End_Vol_1?oldid=2222250"
Community content is available under CC-BY-SA unless otherwise noted.