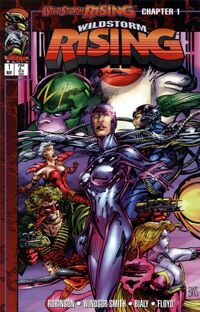 WildStorm Rising was a two-issue limited series originally published by Image Comics. The series served as a bookend to the ten-chapter "WildStorm Rising" event that swept through all WildStorm-related titles in 1995. Both issues, as well as the satellite crossover issues were collected in trade paperback format.

Retrieved from "https://dc.fandom.com/wiki/WildStorm_Rising_Vol_1?oldid=1479970"
Community content is available under CC-BY-SA unless otherwise noted.