The WildC.A.T.s, also known as Wild Covert Action Teams, are a team of super-heroes in the Wildstorm Universe. They are agents of Khera in an ancient alien war between the Kherubim and Daemonites. Having crash-landed on Earth centuries ago, this battle continues in the modern era as they operate out of the Halo Corporation in Los Angeles. Their founding members were Grifter, Lord Emp, Maul, Spartan, Void, Voodoo, Warblade and Zealot. This expanded to include Condition Red, Ladytron, Majestic, Savant and Tao. They were created by Brandon Choi and Jim Lee for WildStorm Productions, first appearing in the Image publication WildC.A.T.s #1. (1992) 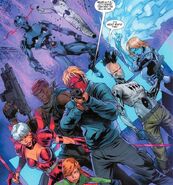