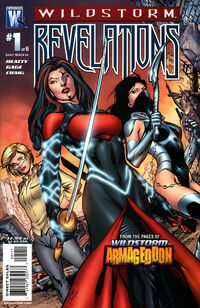 Wildstorm: Revelations comic book limited series, written by Scott Beatty and Christos Gage with art by Wes Craig. Revelations was the start of a number bi-weekly series, and was followed by Number of the Beast, which resulted in the "relaunch" of a number of Wildstorm titles.

Retrieved from "https://dc.fandom.com/wiki/Wildstorm:_Revelations_Vol_1?oldid=1479973"
Community content is available under CC-BY-SA unless otherwise noted.