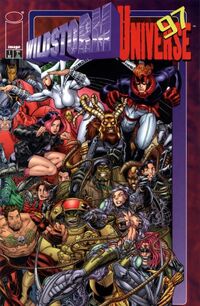 Wildstorm Universe '97 was a three-issue limited series originally published by WildStorm Productions for Image Comics. It is a reference guide providing profiles on the heroes and villains seen in the various Wildstorm Universe titles at the time. It was a followup to the earlier WildC.A.T.s Sourcebook series.

Given the title, it was presumably intended to be followed by a Wildstorm Universe '98 series in the following year, etc. However, no sequel series were published.

Retrieved from "https://dc.fandom.com/wiki/Wildstorm_Universe_%2797_Vol_1?oldid=1987332"
Community content is available under CC-BY-SA unless otherwise noted.