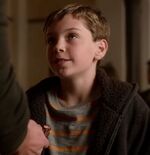 William Clayton is the eldest child of Oliver Queen. His mother Samantha Clayton iniatially raised him alone and kept him away from his father and the rest of the Queen family fearing that they would be a toxic influence. William didn't initially know he was Oliver's son, until he turned eleven. Because of his paternal grandmother : Moira Queen, Oliver has always believed that Samantha lost the baby, soon after she found out she was pregnant.

After his mother's death, he moved in with his father. After a while, her father's girlfriend, Felicity Smoak, moved in with them, and later she and Oliver married.

As a grown man, he changed his name to William Harris, working in the business world at Harris Consolidated while secretly acting with his sister Mia Smoak and friends Connor Hawke and Zoe Ramirez to fight crime in Star City.

Retrieved from "https://dc.fandom.com/wiki/William_Clayton_(Arrowverse)?oldid=2541954"
Community content is available under CC-BY-SA unless otherwise noted.