This article is part of the DC Database Recommended Reading project, a series of articles written by our editors. They are meant as a guide to help both new and old readers, either getting into comics for the first time or looking to read more on their favorites. These should not be taken as a definitive guide; obviously you can start wherever and with whatever you want, but they're some general suggestions that we think you might find enjoyable. 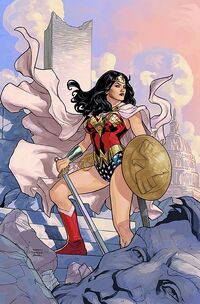 Wonder Woman is the most well-known female superhero in comic books. Despite this, her books have never sold as well as her male counterparts Batman and Superman. There are lots of great runs on Wonder Woman by many different writers and artists, but they lack consistency. Wonder Woman is frequently retooled or redesigned in new locations in an effort to increase her sales. This means that the various runs don't always build on each other very strongly, but it also gives us a wide diversity of top-notch stories. You can pick up the beginning of almost any writer's run and be able to read it comfortably start-to-finish without prior knowledge of the character.

Retrieved from "https://dc.fandom.com/wiki/Wonder_Woman_Recommended_Reading?oldid=2206495"
Community content is available under CC-BY-SA unless otherwise noted.