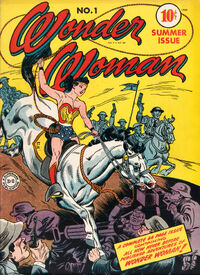 Wonder Woman (Volume 1) is an ongoing series, first published by All-American Publications and later by DC Comics. It initially ran from 1942 until 1986. It stars Wonder Woman and, from #271 to #321, had a back-up feature with the Huntress.

Retrieved from "https://dc.fandom.com/wiki/Wonder_Woman_Vol_1?oldid=2804297"
Community content is available under CC-BY-SA unless otherwise noted.