Wonders of the World (Earth 2)

View source
watch 01:33
House of the Dragon Trailer - The Loop
Do you like this video?
Play Sound

The Wonders of the World

The Wonders of the World

The Wonders of the World is a team of heroes comprised of the majority of the Earth's superheroes that have banded together to protect the world from the forces of Apokolips while also protecting their world from those who would seek to throw their society into chaos. 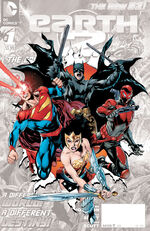 The First Wonders were a group of eight heroes who fought against the Steppenwolf and his Parademons during the Apokolips War. The team was lead by the Ternion, which composed of Batman, Superman, and Wonder Woman. The group faced many hardships during the war including the death of Catwoman, the betrayal of Mister 08 who killed millions of brainwashed people, the death of every Amazon and kidnapping of Wonder Woman's daughter by Steppenwolf. The remaining Wonders launched a last ditch effort to end the war, which ended with the deaths of Wonder Woman and Superman at the hands of Steppenwolf, the death of Batman who sacrificed his life to send all of the Parademons back through the Boom Tubes, and the disappearance of Robin and Supergirl.

Five years after the war ended New Wonders began to appears such as the speedster known as Flash, the Green Lantern, and the winged hero Hawkgirl who first worked together to take down The Man of Grey, Solomon Grundy. The Gray attempted to dissuade Alan Scott from destroying its agent by producing an apparition of his lover Sam, but Alan soon saw through the charade and freed himself from the Gray's influence, using his green energy to take Solomon Grundy to the moon where there is no life for him to corrupt.

The Tower of Fate

After Solomon Grundy was defeated, Alan Scott departed to solve the mystery of who killed his lover Sam Zhao. Jay Garrick tried to resume his normal life by contacting his mother, only for the World Army to come after him to apprehend him. Jay and his mother escape capture with the help of Khalid Ben-Hassin, who were then transported into another dimension by Karel Wotan, who wants Khalid to fetch the mystical Helmet of Nabu from a place called the Tower of Fate, threatening to kill Mrs. Garrick if her son Jay doesn't help. Together Jay and Khalid enter the strange tower, with Jay using his speed powers to deal with its beastly protector while Khalid proceeds the rest of the way to the room where the helmet is kept. With Khalid becoming Doctor Fate upon putting the helmet on, he, Jay, and Mrs. Garrick are transported back to the real world, where the Wonders carry on their fight with Wotan. Green Lantern joins soon after and helps to defeat Wotan while also giving the Wonders a place of refuge from the World Army's pursuit of them.

The Wonders team up with the World Army as it attempted its invasion of Dherain after Steppenwolf had killed its king and installed himself as the ruler of the country, hoping to use it as his base for conquering the Earth. Steppenwolf had sent out his Hunger Dogs -- Bedlam, Beguiler, and Brutaal -- to deal with the Wonders and the World Army super-agents, while the amassed forces of the World Army under the command of Amar Khan were utterly destroyed. The Wonders succeeded only in evacuating the survivors of the failed invasion while Green Lantern was beaten to death by both Steppenwolf and Brutaal.

After Brutaal kills Steppenwolf and reveals himself to be Superman, now working as an agent of Darkseid to prepare for another Apokolips invasion, the Wonders work together with the World Army to find a way to defeat Superman and keep the world safe. Unknown to them until later, a new Batman infiltrates the World Army Arkham Base to free a few heroes that would be useful in defeating the new invasion: a female Atlantean named Marella (Aquawoman) and a young teenager named James Olsen (Accountable). A Kryptonian is discovered to be located in a secret level below the stasis chamber room of the Arkham Base, who turns out to be Val-Zod, one of four individuals who escaped Krypton's destruction. A female android called Red Tornado, who is uploaded with the memories of Lois Lane, also joins the Wonders.

As Val-Zod learns how to use his Kryptonian powers, the Wonders and the World Army deal with Superman and his parademons as they strike across the globe to crush all opposition while Bedlam uses the intellectual geniuses of Terry Sloan, Mister Terrific, and Mister Miracle to open up a Boom Tube that would be large enough to transport the Earth into Apokolips space. Green Lantern rises from the dead and helps Hawkgirl break the Flash out of captivity, with Aquawoman taking out the parademon hordes following them. Lois Lane tries to get Superman to remember who he was by having him visit his foster parents, the Kents, but a tense confrontation that leads to Superman using his heat vision to kill Jonathan Kent makes Lois realize that he isn't truly Superman. While the Wonders and the World Army help to shut down the Boom Tube, Val-Zod confronts Superman and realizes for himself that his opponent isn't really Superman, but actually a clone that was given Superman's memories, when his body starts crumbling. Lois appears to disintegrate the crumbling form of Superman's clone into dust, thus ending his threat for good.

Incomplete
There's something missing here. This section of the article is incomplete, and contains information, but requires more before it can be considered complete. You can help DC Database by editing this page, providing additional information to bring this article to a higher standard of quality.