This page contains information about World's Finest (Volume 1) . World's Finest Comics was published initially by National Periodical Publications and later by DC Comics beginning in the Summer of 1941 until January of 1986 spanning a tota 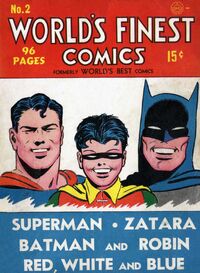 World's Finest Comics was published initially by National Periodical Publications and later by DC Comics beginning in the Summer of 1941 until January of 1986 spanning a total of 322 issues. The series was intially entitled World's Best Comics, but changed to World's Finest Comics after issue #1.

Originally, World's Finest Comics was an anthology series that featured DC's most popular characters from other anthology series—mainly Superman and Batman. The comic was 1.5 times larger than standard comics, and cost 15¢ (when standard comics were 10¢). The series was orginally issued on a quarterly schedule for the first twenty issues. It then went to a bi-monthly schedule but still retained more pages then the other DC Comics at the time.

With World's Finest #71, the comic was made regular-size (and price). In order to retain the draw of Superman and Batman without giving them both full-length stories, the series began chronicling the team-up adventures of Batman and Superman. Unlike their Post-Crisis counterparts, the early versions of these characters were the greatest of friends and routinely teamed up to battle the likes of villains such as Lex Luthor, Brainiac and the Joker. Although not considered an official part of the World's Finest team, the Golden Age Robin assisted them in many of their adventures.

For the best part of the Silver and Bronze Ages, the series continued publication with different formats going from regular size comics, featuring experimental ideas such as removing Batman from the lineup and making this series a team up book for Superman while Batman would team up with other heroes in the The Brave and the Bold Vol 1. The sales of World's Finest Comics began to lag so Batman was brought back to the lineup. Other concepts included the Super-Sons storyline and the 80-pages Dollar Comics, which featured various back-up stories including Wonder Woman, Captain Marvel, Green Arrow and Hawkman among other notable characters, but always with a main focus on Batman and Superman. The series was eventually cancelled in 1986 after a series of failed attempts to revitalize the concept of the primary characters and the growing tensions between them as their new characterization made it impossible to keep the stories feasible.

Retrieved from "https://dc.fandom.com/wiki/World%27s_Finest_Vol_1?oldid=2746672"
Community content is available under CC-BY-SA unless otherwise noted.