"Worlds Collide": According to the plan, Clark Kent arrives in Gotham City to make a report about Luthor's activities in Gotham and upon his arrival, he is welcomed by Alfred, who was instructed to assi

I'm a respectable businessman -- I don't make deals with criminal madmen... but the way I see it, after tonight -- you owe me! Oh, and Joker -- I always collect my debts.

According to the plan, Clark Kent arrives in Gotham City to make a report about Luthor's activities in Gotham and upon his arrival, he is welcomed by Alfred, who was instructed to assist Clark by locating him in a hotel and also go alongside him around the city. At that moment, Bruce Wayne is doing the same as he arrives at Metropolis and is welcomed by an eager Jimmy Olsen and a reluctant Lois Lane, who was assiged to cover Bruce's investigation of the development areas of Metropolis.

That night, Superman goes out on patrol in Gotham City. At that moment, a couple of Luthor's henchmen are threatening people of an old building to abandon the place, but when they refuse, the thugs decide to weaken the building's structure and make it collapse. Superman arrives in time to prevent the building from falling down and killing all the innocents. Upon listening to the news, Luthor is frustrated that his enemy has followed him to Gotham.

The next morning, the people of Metropolis are distracted as Tweedledum and Tweedledee create a big juggling scene in the middle of the streets, while other hoods wearing clown masks break into a pawn shop. Batman spots the scene from the top of a nearby building and he jumps to the scene, kicking the masked hoods out of the shop. The Metropolis Police Department arrive shortly after Batman has dealt with the criminals and the officers decide to turn a blind eye on Batman's presence in Metropolis, even if just for a moment. Unknown to all of them, the Tweeds have escaped through the sewers and they are closely followed by the Joker, who is shocked yet delighed that Batman has followed him.

Meanwhile at the Midway Orphanage, Reverend Oliver Monks is having secret phone conversations with an unknown man behind the back of his partner, Reverend Adam Fulbright.

At that moment, Clark Kent has a dialogue with the people he rescued the other night, although none of them know he is the man who saved them. It is here that Clark learns that Luthor's plan involves the seize of large areas of Gotham for a purpose still undisclosed. That night, a couple of Joker's henchmen attempt to sabotage one of LexCorp's properties in Gotham by placing explosives, but they are discovered by Luthor's men. The Joker's henchmen would've been killed if Superman hadn't arrived in time to save them, but the whole affair has left him curious. So the next morning, Clark Kent is waiting at the exact place for Luthor to arrive and much to Clark's surprise, he arrives alongside Reverend Monks. When Clark attempts to question Luthor about his affairs in Gotham, he is removed by force, but not before he gets a glimpse of the blue-prints for a Gotham Orphanage and Monks' face of guilt and shame.

At that momen in Metropolis, Bruce Wayne is supposed to meet with Lois for an interview, but she has sent Jimmy to ask the questions. Bruce decides to cut the interview short as he had expected to have a moment with Lois by himself and instead, he goes to investigate Luthor's businesses, to find any connection with the Joker. Disguised as a homeless person, Batman witnessess how the Tweed brothers use smoke bombs to create a distraction while a couple of Joker's men place an explosive in the LexCorp building. Batman takes down the masked men, but when the police arrives, he is forced to leave the scene. Hours later, Bruce finally meets with Lois, who couldn't be less excited to talk with the rich playboy from Gotham. Lois considers that Bruce being interested in the development areas of Metropolis is hypocritical, but her stand regarding him changes considerably when Bruce deals with Lex Luthor, who just arrived at the place, and gives away the fact that he is very aware of Luthor's corrupt businesses.

In his last day in Gotham, Clark Kent learns that the Midway Orphanage is throwing a Christmas party with Lex Luthor as the guest of honor and doing some background research, he learns that Reverend Monks is also a doctor. Meanwhile, Bruce Wayne has a conversation with Perry White in which he learns that Monks might have also been involved with the old owner of the Gotham and Metropolis orphanages, Byron Wylie.

True to Bruce's discovery, Reverend Monks was an orphan kid taken by Byron into his orphanages, where he not only learned to survive, but he also learned the criminal ways of Byron. Over the years, Byron and Monks remained close and when Monks graduated from medicine school, he was responsible for faking Byron's death and took him to Midway Orphanage with him, behind Flubright's back. However, Monks has now gotten tired of taking care of Byron and he has made a deal with Lex Luthor, who wants to buy the Midway Orphanage. This decision is not supported by the elder Byron, which leads to several discussions among them. The kids at the orphanage notice strange noises coming from the cellar, but Reverend Fulbright ignores the kids' warnings as being their imagination. 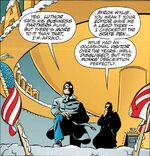 Later, Bruce has an encounter with the Joker in the streets of Metropolis, but Bruce only gets a piece of paper from the madman. Moments later, Bruce arrives at the Daily Planet, where Clark Kent is waiting for him. The two of them go to the rooftop of the building to discuss in private and they both agree that they need to attend the Christmas party at the Midway Orphanage to further investigate the business between Luthor and Monks.

The day of the party arrives, but Reverend Fulbright is attacked while he is dressing as Santa Claus by an unknown person. Hours later, the party starts and the kids have a nice Christmas celebration, with many important guests like Superman watching the whole event. However, nobody seems to notice or care about the Santa Claus in the corner. In the middle of the party, Reverend Monks decides that it's time to make the announcement with Lex Luthor and he reveals that he will sell Midway Orphanage to Luthor, who then announces that he will open new orphanages in Gotham and Metropolis and he would close Midway Orphanage and make it his private mansion. As the two of them get ready to sign the deal, Superman interrupts and tells everyone about Monks connection with the old Byron Wylie. Things don't look good for Luthor or Monks and the Santa Claus in the corner starts to leave when Batman strikes him down and reveals him as the Joker.

Batman deduced that Joker would be at the party, because the paper he took from the madman as Bruce Wayne, had the phone number of Monks, who is finally exposed for being connected to the Joker and Luthor. The reverend breaks under the pressure and he confesses that he continued a life of crime, following Byron's teachings. As an adult, he deceived everyone and convinced them he was a good man, but Joker learned the truth and started blackmailing him with exposing his criminal past. Eventually, Luthor also learned of this past and he also blackmailed Monks, forcing the man to sell the orphanage, making Luthor look good in the public eye. In the middle of this confession, Byron appears and reveals that he is still alive, thanks to Monks who faked his death. Superman attempts to stop Byron, but the man has prepared a trap in the orphanage and soon, the whole place starts burning.

Batman, Superman and the other guests get busy taking all the kids to safety, but in the midst of the confusion, the Joker and Luthor disappear. Once everyone is safely outside, the heroes realize that Monks and Byron are still inside, but it is too late to save them, as the whole burning house collapses on top of them and they are singed in flames. 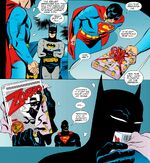 Once all the guests and the kids are gone, Batman and Superman remain behind. They discuss their next step in capturing Luthor and Joker, but since it is Christmas, Superman has brought a present for Batman. The Dark Knight opens the package and finds the classic film "Zorro" inside and the memories come back to him. Superman realizes that he has made a mistake, but Batman simply says that he has already seen the movie. Batman tells Superman that he can spend Christmas with him in Wayne Manor, but Superman says that he usually spends Christmas with friends. Once again, Superman realizes he's being insensitive and he tries to fix his mistake by clarifying that it's friends in Metropolis. Batman doesn't listen and as Superman leaves wishing him "Happy Holidays", to which Batman simply replies that crime doesn't take holidays as he drives away in the Batmobile.

Meanwhile, Luthor is driving back to Metropolis, when he hears Christmas Carols coming from the truck of his car. He and his thugs get down to investigate and when they open the truck, the Joker comes from inside, laughing at them. Joker tells Luthor that he still has one more week to be allowed in Metropolis as part of their initial agreement, but Luthor refuses to deal with Joker anymore and he tosses the madman on the road before leaving in his car. Soon, the Tweeds arrive in a Joker-Christmas-sled, pulled by reindeers and they head towards Metropolis, where Joker still has unfinished businesses.

Retrieved from "https://dc.fandom.com/wiki/World%27s_Finest_Vol_2_2?oldid=2519880"
Community content is available under CC-BY-SA unless otherwise noted.