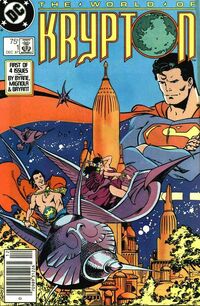 World of Krypton (Volume 2) was a four-issue limited series published from December of 1987 until March of 1988. The series explored the historical implications that ultimately led to the destruction of the planet, Krypton. The revised history and culture of the modern Krypton differs greatly from that of the Pre-Crisis Krypton of the Silver Age continuity.

Back to Comics Contents : Comics W : World of Krypton Vol 2

Retrieved from "https://dc.fandom.com/wiki/World_of_Krypton_Vol_2?oldid=2394945"
Community content is available under CC-BY-SA unless otherwise noted.