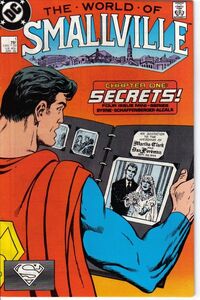 World of Smallville was a four-issue limited series published from April until July of 1988. The series provided previously unknown historical background on Jonathan and Martha Kent as well as Lana Lang and her connection to the alien Manhunters.

Back to Comics Contents : Comics W : World of Smallville Vol 1

Retrieved from "https://dc.fandom.com/wiki/World_of_Smallville_Vol_1?oldid=2670718"
Community content is available under CC-BY-SA unless otherwise noted.