Wrath of the Spectre (Volume 1) 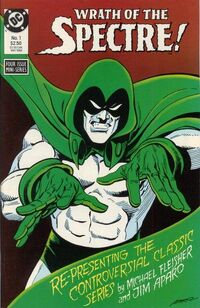 Wrath of the Spectre is a limited series that consist majorly of reprints of The Spectre series that ran in Adventure Comics (Volume 1) from issues #431 to #440. The series was created by editor Joe Orlando, with scripts by Michael Fleisher and illustrations by Jim Aparo. The fourth issue of this mini-series includes three previously unpublished stories that were scripted for the original series, but couldn't be published due to the sudden cancelation of the same.

Although the original series was deemed as controversial at the time it was published due to the depiction of violence and horror themes, "Wrath of the Spectre" has received generally good reviews from fans and professionals alike. The whole series has been collected in Wrath of the Spectre.

Retrieved from "https://dc.fandom.com/wiki/Wrath_of_the_Spectre_Vol_1?oldid=1992371"
Community content is available under CC-BY-SA unless otherwise noted.