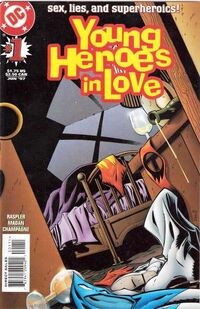 Young Heroes in Love was an ongoing comic book series that blended elements of the super-genre with that of a romance title. The series featured the Young Heroes, a loose-knit organization of like-minded teens which included members such as Bonfire, Frostbite, Hard Drive, Junior, Monstergirl, Off Ramp, Thunderhead and Zip-Kid. The series spanned seventeen issues as well as a special 1,000,000th issue. The series was created by Dan Raspler and Dev Madan, and explored the trope of the "garage band" as it applied to super-heroes: the Young Heroes were not so much a team as a somewhat haphazard grouping of superhumans who had been persuaded to work together, but were not really ready to deal with it.

Retrieved from "https://dc.fandom.com/wiki/Young_Heroes_in_Love_Vol_1?oldid=1480014"
Community content is available under CC-BY-SA unless otherwise noted.