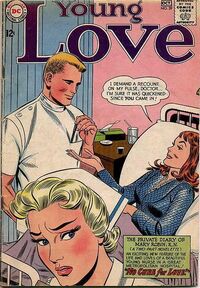 Young Love was a romance-themed comic book series published by Prize Publications from 1949 to 1956. A second volume, picking up numbering from Prize's All for Love, ran from 1960 to 1963 before being acquired by DC Comics. The volume and issue numbers of the second series do not always make sense, as Prize chose to start with Volume 3, issue #5 for its second series, and then changed the volume number annually thereafter (a common practice among periodicals).

DC published Young Love from 1963 to 1977 beginning with issue #39, and introduced the recurring character of Mary Robin, R.N.

Retrieved from "https://dc.fandom.com/wiki/Young_Love_Vol_1?oldid=2509281"
Community content is available under CC-BY-SA unless otherwise noted.