Y'know, sometimes sidekicks can be cousins of real superheroes!

Zachary Zatara, known simply as Zatara, is a magical member of the Tiny Titans. 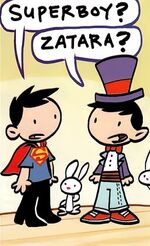 People continuously to confused Zatara with Superboy. To prove the two looked alike, Raven gave Zatata a Superman shirt. Supergirl walked in and tried to take Zatara flying, but since he couldn't, she took him to the Fortress of Solitude. After examining the boy, Jor-El gave him a Superman cape, believing this would restart his powers after a day. Raven was going to fix the issue, but the arrival of Kid Flash convinced her to give everyone replicas of his costume.[1]

Retrieved from "https://dc.fandom.com/wiki/Zachary_Zatara_(Tiny_Titans)?oldid=2826678"
Community content is available under CC-BY-SA unless otherwise noted.